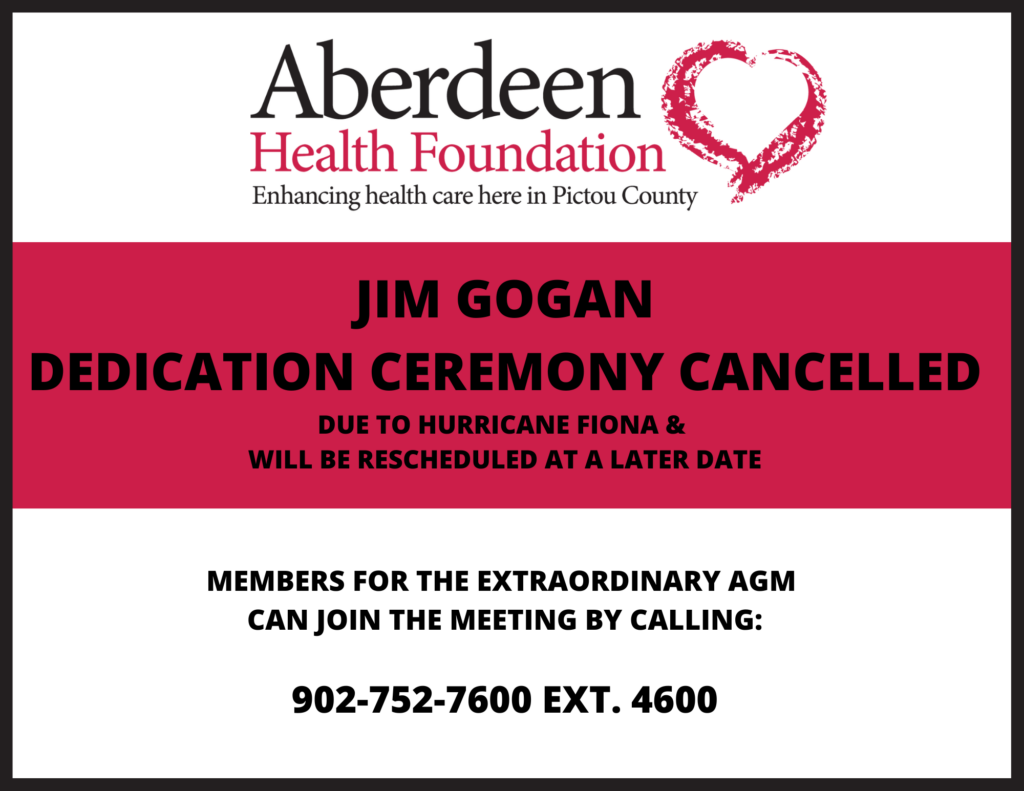 The Aberdeen Health Foundation was founded over 35 years ago, born from a need for updated hospital equipment at the same time government funding was being reduced. While the needs were clear to all, it was founding director and lifelong member Jim Gogan who became the driving force behind the vision to establish an endowment fund, an idea that has created a remarkable legacy for health care in Pictou County.

Jim served the organization from its inception in 1986 to his passing in June 2021.

“The first thing I would say about Jim Gogan is he was a very nice man,” says Jim Shaw, who served on the Aberdeen Health Foundation Board of Directors alongside Gogan for over 26 years. “He was a huge presence in a room. He was very gregarious, and he had a huge laugh, but on top of that and most importantly, his level of knowledge both in business and investments was an incredible asset to the Foundation and all of the charitable and volunteer organizations he served on.”

A well-respected business leader in the community, Jim was heavily involved in handpicking the original fundraising team and board members, says Shaw. “He made sure that the personalities around the table were all very well known, identifiable, respected and trusted people in the community.”

Those members set a goal to raise $5 million, with a promise to the community that if they reached it the money would be set up in an endowment fund to protect the capital. Through Jim’s steadfast leadership and the trust and support of the community, the campaign team exceeded their original goal and raised over $6 million.

“It’s a remarkable legacy – it took courage to commit to an endowment that would last for generations to come. As a result, we are in the rare position of not having to ask the community every year to help fund large pieces of equipment,” says Susan MacConnell, current Board Chair. “This strong and stable endowment fund has allowed us to invest in the growing health care needs of our community year after year, for decades, thanks to the incredible commitment, foresight and investment skills of people like Jim.”

To understand the true impact and success of this vision, the Aberdeen Health Foundation has received $30 million in donations from the public since its inception, disbursed $28 million in health care investments while growing donated capital to $60 million. Through this approach, the Foundation today is able to provide over $2 million annually to enhance health programs in the community, with no active fundraising beyond the initial campaign.

While remarkable in its own right, Jim’s legacy didn’t stop with the creation of the endowment fund. “I think another long-lasting legacy of Jim Gogan is that the Foundation is known in the community for being excellent stewards of the funds in its care,” says Shaw. “He was big on appropriate governance and process. The Board has always been very professional in its operations and decision-making. It was set up properly, with bylaws, processes and accountabilities, and I think all of that certainly contributes to people’s trust that their donations will be well-stewarded by the Foundation.”

To honour Jim and his dedicated service to the Aberdeen Health Foundation, the Medical Equipment Fund will be renamed the Jim Gogan Medical Equipment Endowment as part of a special dedication ceremony that will take place on September 29, 2022 at 6:30 pm at Summer Street.

“Jim’s impact on the community is probably under-known and under-appreciated by most,” admits Shaw. “People in the public don’t really take the time to read reports from foundations or attend AGMs, and we all tend to take our health care system a bit for granted. We expect to go in and have the machines, equipment and programs to all be there for us, but we don’t give much thought to where they came from or how they got there. I think a lot of his legacy will always fly under the radar, but for those of us who were close to it, whether on the Board alongside him or working within the Foundation, we’ll always know the role he played and the impact he has had on the health care system and community in Pictou County.”