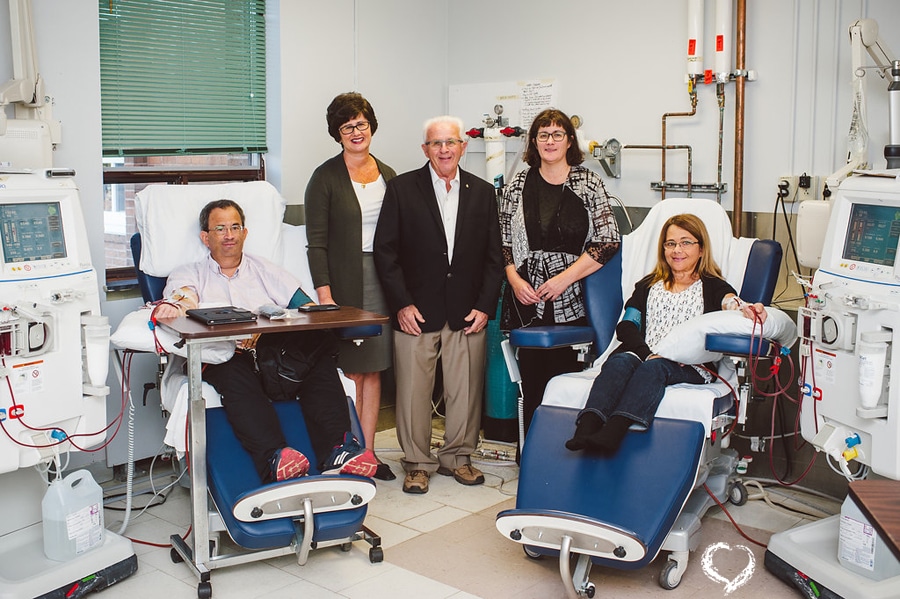 When Marian MacIntosh passed away in December 2015, her family knew it would be important to Marian to have one more opportunity to help others affected by kidney disease. That is why they named the Aberdeen Health Foundation as one of two charities of choice, with all donations to the Foundation being directed to the satellite hemodialysis unit at Sutherland Harris Memorial Hospital in Pictou.
With kidney disease affecting Marian and two of her children, the cause hit very close to home. All three had received lifesaving dialysis treatments and eventual kidney transplants. And all three had experienced regular, recurring travel to other communities for treatment. When the dialysis unit opened in Pictou in 1999, it made a huge difference to their family.
At that time, Marian had been travelling to Halifax three times a week for dialysis. She was able to get a spot in the new clinic and continued to receive treatment there for nearly a year, until she received her kidney transplant in October 2000.
At that point, she was the third in her family to undergo treatment for kidney disease – in 1986 her youngest daughter Ruth-Anne received a transplant from her middle daughter Jane after several years of kidney treatments at the IWK Health Centre, and her son Glenn received a transplant in 1993 after two years of dialysis treatments in Halifax.
Reflecting on her family’s experience, Ruth-Anne notes the bittersweet extremes of living with kidney disease. “Yes, we have been affected by this disease but we have also been the beneficiaries of incredible care and organ donation. Mom and dad wanted to give back and for that reason, our family has volunteered and fundraised for kidney disease research and patient support for 30 years.”
After many years living with their successful transplants, both Glenn and Ruth-Anne are back on dialysis and travelling for treatment. A reality that brought sharper focus to the family’s desire to enhance care locally. Fortunately, as space became available, both have since gotten a spot at the satellite clinic in Pictou, where they continue to receive treatment as they await another transplant.
The unit is part of Nova Scotia Health Authority’s renal program and is one of eight satellite units providing hemodialysis in rural locations for medically stable individuals. It provides services for four dialysis chairs in Pictou, serving 16 patients. The gifts in memory of Marian to the Aberdeen Health Foundation helped to replace one of the chairs in the unit, with the Foundation providing additional funding to replace the unit’s other three chairs.
“We are ever so thankful for the MacIntosh Family who understood the importance of naming a charity of choice when Marian passed away,” says Susan Malcolm, Executive Director of the Aberdeen Health Foundation. “It may seem like a small decision but it has made a much greater impact than would otherwise have been possible.”