Giving Back and Helping Other Cancer Patients

Home 5 News 5 Giving Back and Helping Other Cancer Patients 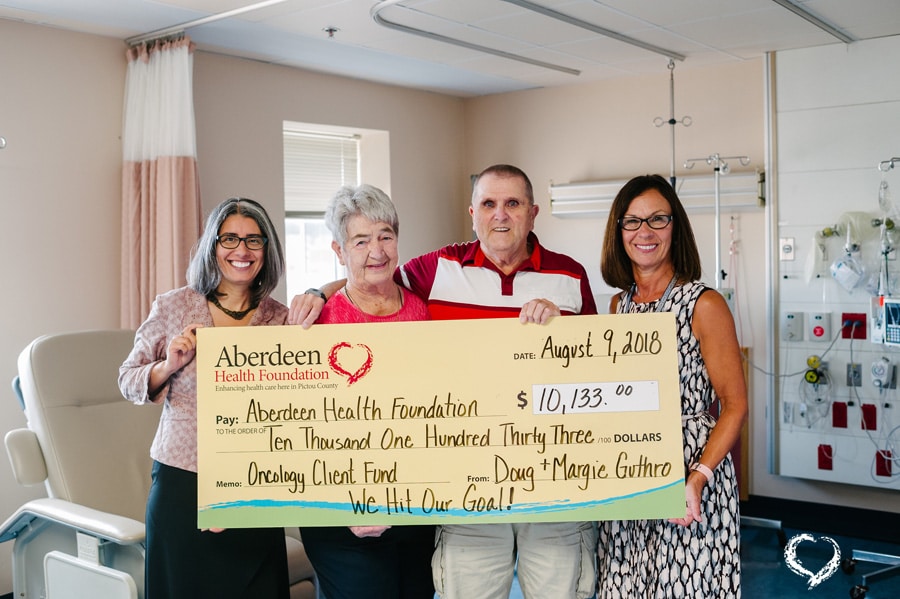 Doug and Margie Guthro have hit their fundraising goal. The pair has been fundraising for the Aberdeen Health Foundation’s Oncology Client Fund and, in a little over a year, they managed to raise just over $10,000.
Doug got the idea while supporting his wife, Margie, as she underwent cancer treatment that required them to travel and stay in Halifax for several weeks.
Doug felt so grateful to be at his wife’s side at such a physically and emotionally challenging time. But the thought of others not being able to afford to have someone with them for their treatment began weighing on his mind.
That’s when he made it his mission to help others in Pictou County who found themselves in the same position. He decided to fundraise for The Aberdeen Health Foundation’s Oncology Client Fund, which helps patients with the travel costs of their treatment.
He shared his goal with his friends and the response was immediate. “I simply could not have done this so quickly without the support of my amazing YMCA swim family and especially Margie Beck. They were right there every step of the way.”
As a prolific artist, Doug used his art as a way to encourage support. He produced a calendar of his art that he sold in the lead-up to Christmas.
With support from others, he hosted several different events at which he gave a piece of his original artwork to everyone who made a donation to the Foundation. His final event, at the end of July, also included a successful flower and yard sale.
“I was overwhelmed by the tremendous support at that event, which took us to our goal,” says Doug.
Cancer Patient Navigator, Bonnie McCarron, explains that treatment consisting of chemotherapy alone can, in most cases, be administered in the chemotherapy clinic at the Aberdeen. But in those instances when families have to travel, the Oncology Client Fund is there to help.
“Patients are often away from their homes for 4-6 weeks. The Guthros recognized that the help the Oncology Client Fund provides is critical in easing the anxiety and stress of treatments. We are so thankful for the fund and for donors like Doug and Margie who made it their goal to raise money for this important cause. They are truly paying it forward.”