Don & Margaret Cameron were both born in Pictou County in 1920. They were born into quite different circumstances. Don was born in Scotsburn to Aubrey and Nancy (MacBain) Cameron. He was the youngest of six children. Don’s family were buffeted by the economic decline in rural Pictou County between the wars. His family was very poor. While Don’s three brothers enlisted and served in the War, he was required on the farm. By the end of the war he was a major honey producer with a prize herd of dual purpose shorthorns. After the war, he attended Mt Allison, and began his career first as a schoolteacher and later as an administrator. 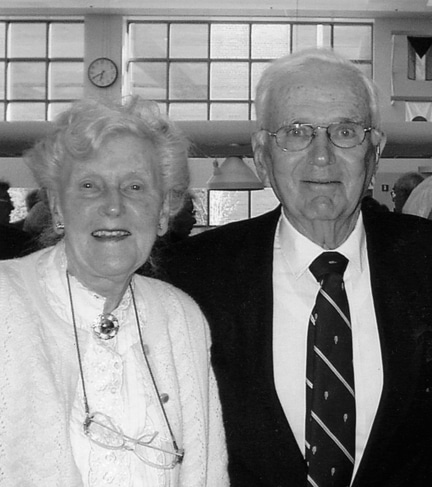 Margaret was the daughter of George Farquhar, a Minister in the Presbyterian Church in New Glasgow and a driving force in Pictou County behind ‘Church Union’. He later studied law and became editor of the Halifax Chronicle. Margaret studied at Dalhousie and Columbia Universities, and became a schoolteacher. She taught in Toronto and Musquodobit Harbour, but it was while she was teaching in Westville that she met Don who was teaching in Tatamagouche. They moved to Sherbrooke, and after some years teaching there – Don was the first principal of the Consolidated High School – Don and Margaret moved to Sackville NB where Don worked at Mount Allison University, first as a professor in the education department and then as registrar.
While Don’s working life was spent away from Pictou County, he always considered Pictou County to be his home. They had lifelong friends and extended family in the area. After he retired, he and Margaret moved back to the family farm in Meadowville.
Don and Margaret had a significant impact on the lives of many young people, both while teaching public school, and then while Don was employed at Mt Allison. For several years they were ‘Dons’ of residences at the university, and when they moved into their own home the door was always open . Over the years many students found support and welcome in their home. The friendships formed during their years dedicated to education lasted their lifetimes.
Margaret and Don were generous. Don never forgot his humble childhood upbringing and Margaret’s outlook was socially conscious. Together they supported many worthwhile causes. They helped individuals in need privately, particularly students struggling to finance their education. Over their entire lives they supported the church and the local hospital, institutions they felt integral to the well being of the community.
Margaret and Don raised four children and had nine grandchildren in whose lives they were engaged and of whom they were proud.
This lifelong care of others motivated the Cameron’s to leave a gift in their Wills to their local hospital. It gave them great satisfaction knowing that the people of Pictou County would benefit from their gift to the Aberdeen Health Foundation.
May is Leave a Legacy Month, contact us to learn more.